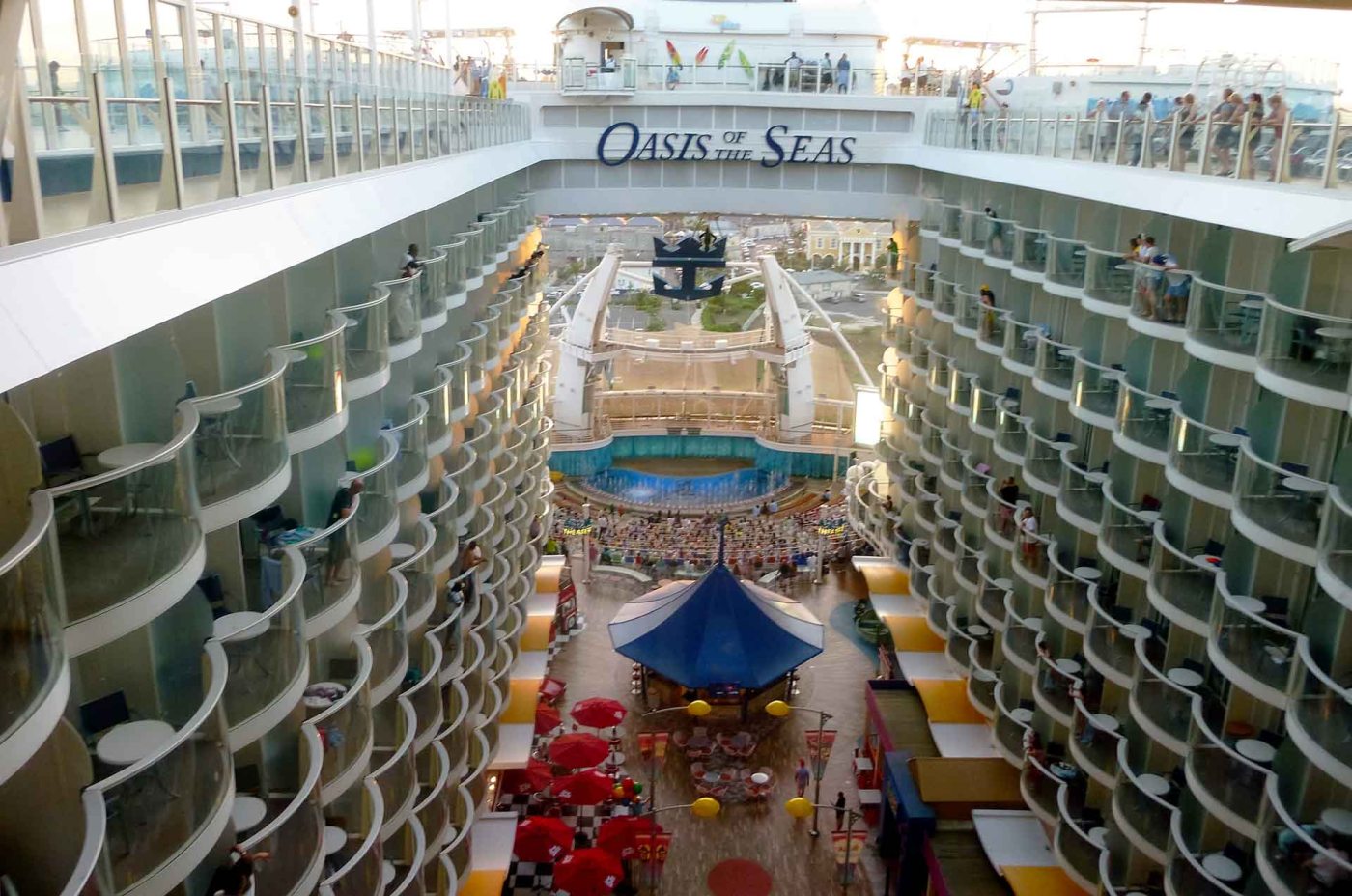 The Oasis of the Seas: the Oasis and the Allure are tied for the best cruise ships we’ve ever been on.

We took a week long cruise from Fort Lauderdale to the Caribbean, stopping in Labadee (Haiti), Ochos Rios (Jamaica), and Cozumel (Mexico). Cozumel is one of our favorite ports so we were happy with the itinerary. We had about a day in each port and 4 days at sea. The ship has so much to do that we definitely did not get bored at any point.

First, let’s start with the embarkation process. We showed up at around 12 pm which is when embarkation began. The process was very smooth and did not take long at all. Royal Caribbean has a very streamlined process. It’s all the more impressive when you consider the ship can around 5,000 passengers! There are approximately 2,000 crew members aboard as well. The ship itself was quite new and the biggest in the world (for now at least).

The room was very nice–we had an inside balcony and our room was slightly nicer than most other rooms we’d stayed in on other ships. We had a nice balcony that gave us a lot of fresh air when we wanted it. I do have to warn you though that the noise from outside doesn’t subside until very late at night. You can see what it looked like in my video below:

The ice rink is a little small, it’s not real ice (it’s a specially designed polymer), and the schedule for the rink is a bit limited because of the ice shows, but it’s definitely fun!

We used the FlowRider machine (there are two aboard, one for surfing and the other for boogie boarding) that provides a simulated surfing experience. We’d never done this before so it was tricky. Keep in mind that the water moves at 35 to 40 miles per hour and there is a real chance of injury if you fall. You can take a look at the video below to see what it’s like:

The zip line is quite high: 9 decks high to be precise. It’s also about 80 feet long. Thus, it’s not a crazy long zip line that will get your heart pumping, but it’s a nice taste of what zip lining is if you’ve never done it before. You have to remember to have laced shoes with socks and your clothes can’t be wet. So try it before you go to the pool to try the FlowRider. Take a look at the video below:

We saw a couple of shows as well and they were great. First, we saw an ice skating show, and it was quite fantastic. Not only do the skaters have to perform acrobatics on sub-par ice, they have to do it on a moving ship. I really have to admire how difficult that must be. Second, we saw a diving show. Well, we saw two to be precise. The diving and acrobatics are very entertaining (the pool they have has a bottom that moves in and out so sometimes divers will appear as if out of nowhere). A couple of divers even jumped off a 6-deck high board into the tiny pool below. This again was quite amazing given that they are performing these dangerous and skilled acts outdoors on a moving ship.

The gym on the Oasis is fantastic. It’s huge, which means lots of cardio machines, and lots of weight lifting equipment. Definitely not just an after thought when the ship was designed. This also means that it can get busy.

We had an assigned seating time for dinner, and it was great. The service was fantastic, and the food was very good. Some days the main courses were so-so, but we were able to get some special order food as well which definitely filled the gap when there was one.

Since this post is mostly about the ship itself, let me give you a short overview of what we did on the shore days (you can read more details in the linked posts). On the first shore day, we were in Labadee. Labadee is a part of Haiti that is owned by Royal Caribbean. The area around Labadee is very green and lush. When you get off the ship, there’s a large beach on the left, and a smaller one on the right. The beach on the right seemed to have better water if you want to go for a dip. The beach area itself is quite nice; it’s definitely been engineered to accommodate a lot of cruise passengers.  You can take a look at my walk around video below:

On the second shore day we were in Jamaica. We explored the shopping area because nothing really caught our eye there that day. (We’d already been to Dunn’s River Falls before which I highly recommend.) The shopping area was not very good so we didn’t spend too much time out and about there.

The third shore day was in Cozumel. Cozumel is one of our favorite ports and there’s always something new to do. We went on an excursion to Rios Secreto and it was fantastic. You can read more about that here (stay tuned–I’ll be writing that up soon). Just a quick recommendation if you plan on shopping: the “recommended” shopping area that the cruise wants you to go to is awful. Avoid it if you can. Playa Del Carmen has the best shopping. The second best shopping is right outside the port area where there is a nice modern shopping center. It closes on the earlier side to plan accordingly.

In summary, the Oasis of the Seas is the best cruise ship we’ve been on (along with the Allure of the Seas, which is its twin). The destinations are nice and have a variety of activities. Definitely recommend this Royal Caribbean cruise!

Follow Adventures for two on WordPress.com
Join 194 other followers