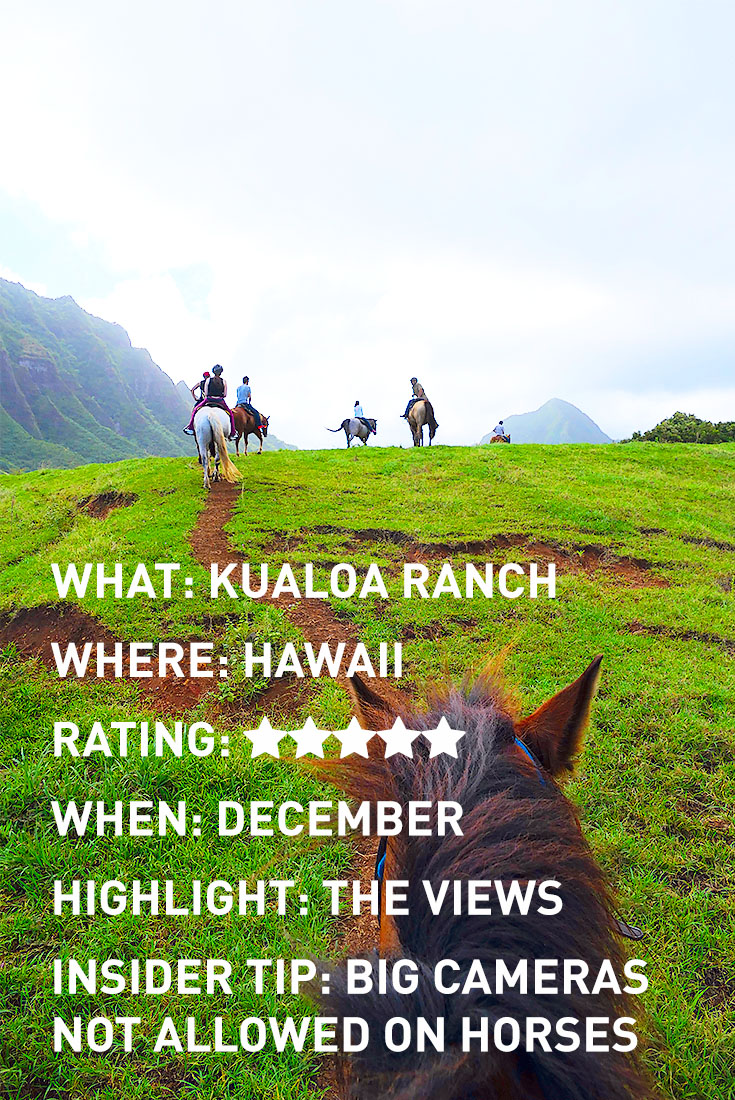 OK well not really. But, you can go horseback riding where Jurassic Park was filmed in Hawaii and still see a footprint if you’re lucky.

Adventure review summary: if you are ever going to go horseback riding, this is THE place to go just for the views.

If you are of a certain generation, and remember being a child in awe when you first saw giant dinosaurs roam the big screen in swaths of greenery, well, you can relive part of that memory by going to Kualoa Ranch on Oahu. This is where those scenes were filmed and the real thing is definitely awe inspiring.

First things first, book your ticket ahead of time before it sells out. Second, do not go ATV riding instead because the experience is not as good as horseback riding. Third, do not bring a camera that has to go around your neck: you can only bring one that can be held in one hand for safety reasons (ie the cord getting tied up somehow could be more dangerous if it is around your neck) . I was given the wrong information on the phone and it took a while to figure things out. Finally, wear sunscreen and sunglasses.

When people think Hawaii, the image that usually comes to mind is of beautiful beaches. As true as that is, Oahu is mostly covered by lush green jungles. And the jungles are set on extinct volcanoes. The scenery and landscape are simply exquisite. Kualoa Ranch is one of the places where you can truly see and appreciate this natural beauty. Kualoa Ranch is on the northeastern part of Oahu, so you will need a car to get there. When we arrived, the first thing we did is have an orientation and short introduction to horseback riding. It wasn’t anything terribly complicated. After about 10 minutes, we were on our way riding our assigned horses.

We first started on a forested path that slowly got denser as we went along. The path was mostly lined with foliage, but we did get a great view of the beach and ocean on the right side of the path starting at about 20 minutes into the trail. It was quite nice to the beautiful water as we rode in a forest. Then, a few minutes later, the path slowly opened up into a majestic valley . Before we knew it, the gorgeous vista opened up and we were in the middle of it all. That’s when we got some of the most amazing views ever. (For a second, you might even forget that the beautiful animal you are riding is a horse and imagine a triceratops.) If you’re a novice and focused on the horse, make sure you still take ample time to look at your surroundings. We rode for a good half hour in the valley. I don’t know if the photos do it justice, but you can take a look for yourself. There are several points along the path where we stopped briefly to take in our surroundings. We spent about half an hour in the valley. 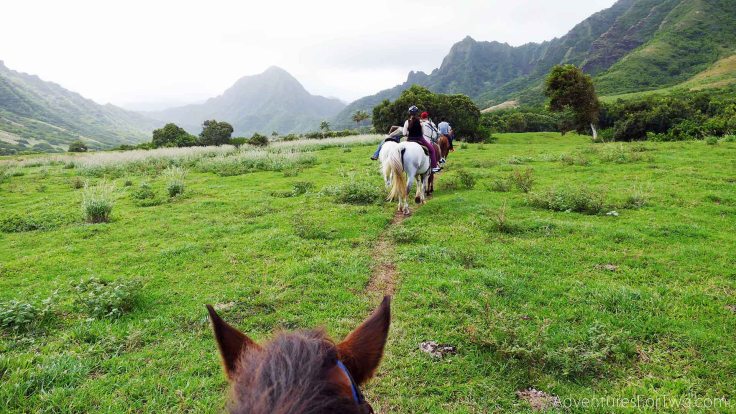 Then, eventually, we found our way back onto a path through the foliage that took us back to the beginning. The guides were nice and the activity was definitely beginner friendly. We had the option of doing a similar path on an ATV. One of our friends who chose that option regretted it because he didn’t get the time to enjoy the views as much as we did.

In summary, a great experience and a must do if you are on Oahu for more than a few days.