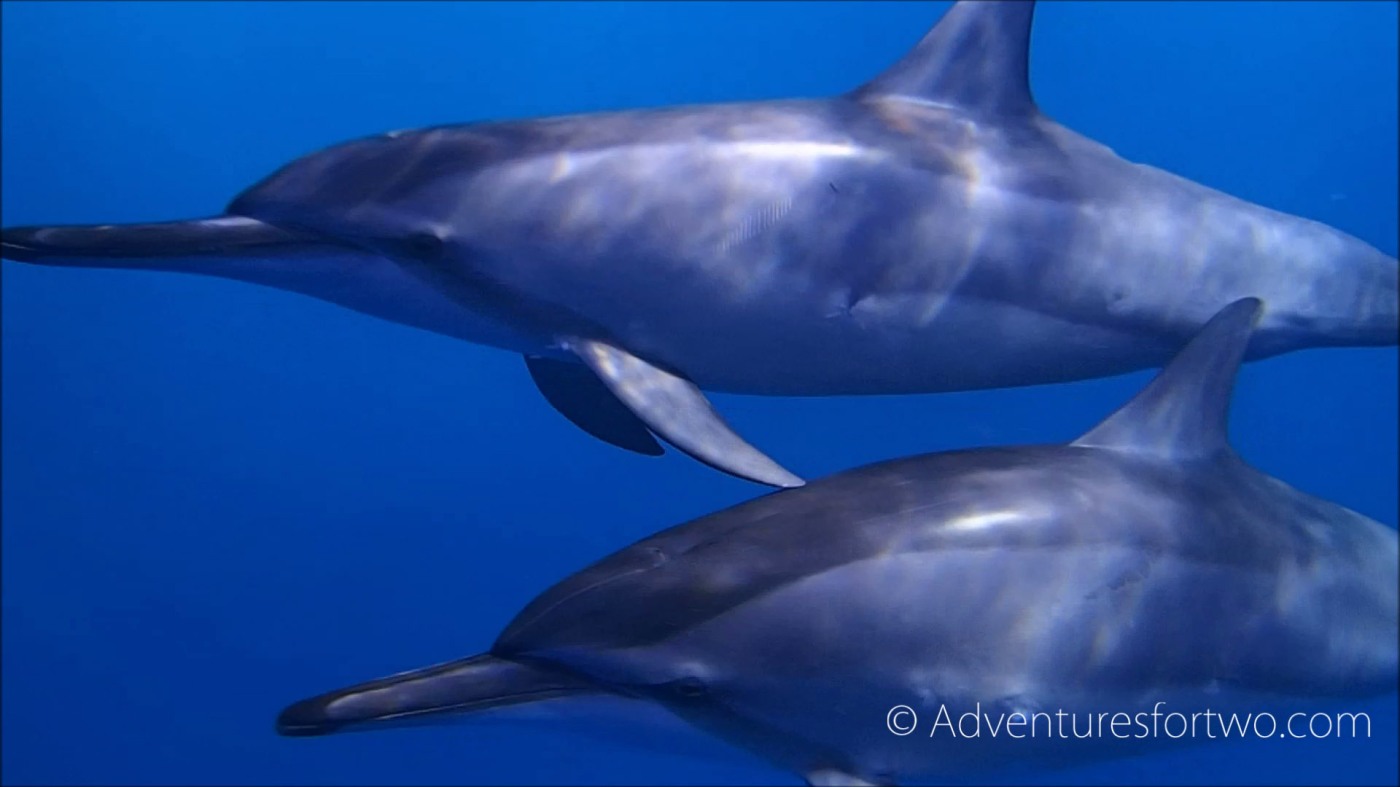 Most of the wild dolphin dives in Kona take you to a place where they sleep during the day. Thus, you get very close to the dolphins, but you are disturbing them while they try to rest. If you are against dolphins in captivity, that is better than supporting dolphin swims at a hotel. However, we were still not comfortable with that. Fortunately, we found a company that started dives earlier in the day, and followed the dolphin pods in the ocean as they made their way home after a night of hunting for food. The dolphins are more difficult to find, and they swim away quite quickly after you jump in the water, but the experience is amazing since you truly are in the wild.

This excursion takes place in open water, so it can be scary. However, unlike the manta ray dive, it takes place during the day which removes that additional potential element of fear. We drove to the south western part of the Big Island to join the tour company at its dock very early in the morning. The trip started at around 7AM and our ship was what equated to a large inflatable motor boat (in my mind at least). Once we were on the boat, we had to make sure to brace ourselves for all the bumpiness: that meant keeping at least one foot under a strap that was screwed into the floor. That was the best way to ensure we didn’t get thrown into the water. The tour involved a lot of zooming around because we couldn’t know exactly where the dolphins will be swimming from. These are wild animals that were going home to rest after a night of hunting. As the boat felt its way around the ocean, we were able to see some humpback whales, and also a manta ray near the surface.

Eventually, the captain spotted dolphins from a distance. The boat tried to pull ahead of where the captain thought the dolphins were headed. Then we jumped into the water, and swam away from the boat towards where we thought the dolphins would swim by. And… success! We saw a few dolphins swim by us. It was a nice feeling, but it went by all too quickly. Once the pod had gone through, we made out way back onto the boat which zoomed off to find the next location where we expected the dolphins to swim through. We jumped into the water again, and waited. This time the wait was much longer. As we started losing hope that we’d see any animals, a whole pod swam right into us. It was quite amazing. We tried to swim in the same direction as them, and every direction we looked in, there were beautiful spinner dolphins. There were approximately 50 dolphins that swam past us. With nothing but blue water in all direction, this truly felt like an experience in the wild with real wild animals.

We then got back onto the boat, and repeated the exercise one more time. And this time again, the experience was incredible. A few of the dolphins came to within a few inches of us; so close that at one point I was afraid that I would get hit by a tail. However, these animals know exactly what they are doing as they spend their lives maneuvering their bodies in the water. The experience was exactly what I was hoping for. After we all got on the boat this time, most of the other people on the small boat were feeling either exhausted, or scared of being this far in open water. When the captain took a vote, I was the only one who voted to stay in pursuit of the dolphins. Needless to say, we completed the journey with a more relaxing snorkel dive near the Captain Cook monument in a bay that apparently inspired parts of Finding Nemo.

Swimming with a pod of 50 dolphins was incredible. This excursion allowed my wife and I to experience wild dolphins truly in the wild. Moreover, we didn’t need to feel any associated guilt about supporting their being in captivity.